KING Edmund Gym Club all but rounded off another superb year of acro-gymnastics with more top performances, this time in the European Championships in Riesa.

Six of the best from the successful Yate-based organisation had been awarded Great Britain call-ups for the prestigious bi-yearly showpiece, together with two of their coaches in Nikki Thorne and experienced Russian Vladimir Makarchenko.

And they didn’t let down, returning to South Gloucestershire with two bronze medals courtesy of the exploits of  Kirsten Owen and Finlay Cochrane in the 11-16 mixed pair class, and Tiana McClurg and Abi Hipkiss in the 13-19 age category. 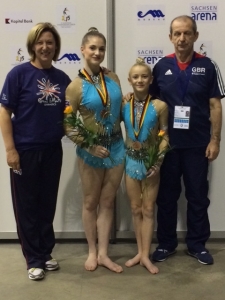 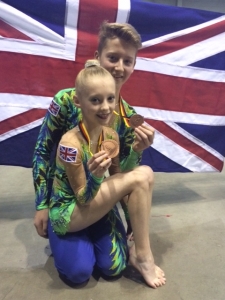 For 13-year-old Fin and 11-year-old Kirsten the experience was mixed with a little disappointment as they had qualified for their final in second place behind eventual winners Russia thanks to a tremendous display in their balance routine, before just being pipped to overall silver by the host nation in the final and forced to settle for a laudable bronze.

There were more promising showings from the club’s established pairing of Christopher Child (20) and Robert Bates (16), who despite their tender years at the level came agonisingly close to entering the medals too in the senior event, having qualified from third position from the preliminary stages before settling for a fourth-placed finish.

Last but not least, Tiana McClurg and Abi Hipkiss had travelled to Riesa with few expectations to burden their young shoulders. But they rose to the occasion in commendable fashion as they too claimed a fourth overall out of nine high-class nations in the knowledge that one of three qualification events undertaken, the balance routine, had reaped them a deserved bronze medal.

After overseeing two enthralling weekends with her Great Britain hat on, King Eddies head coach Nikki Thorne smiled: “It was a fantastic effort by all six of our gymnasts. Fin and Kirsten were so unlucky not to get a silver medal after coming equal first with the eventual winners Russia in the balance routine on the second day. 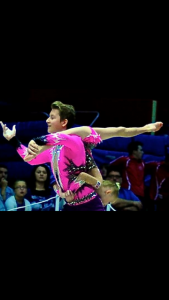 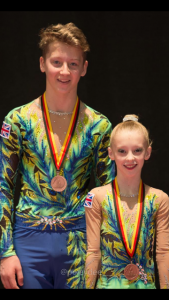 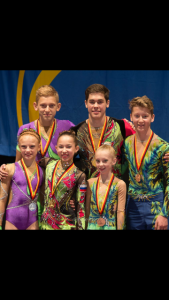 “It was nevertheless a terrific result for them given they were the youngest competing partnership in their section, and with continued hard work they can look forward to good things from the World Championships in China in March.

“Abi and Tiana competed over four days and did extremely well too to qualify for three finals – dynamic, balance and overall – and finish-up fourth overall, which we’re very proud about as the outcome was well above our expectations.

“And Chris and Rob did very well for their fourth-place overall, having qualified from the prelims in third position. They couldn’t have performed any better than they did in all their routines and they adapted to the stiff competition very positively.

“As soon as the championships had ended for them they were showing a tremendous determination to go on and improve on this and with that sort of attitude they can certainly look forward to senior medals in years to come, quite possibly at the World Championships in March.”

For now, King Eddies are gearing up for their last big outing of a splendid 2015, when more medals are up for grabs at the Pat Wade British Classic in Stoke between November 13 and 15.

“We’ll be entering many of our young and up-and-coming competitors as well as our star international performers for the tournament and looking for more medals to cap a wonderful year,” Nikki enthused.