EVERYONE associated with King Edmund Gym Club will never forget that glorious June night when one of our favourite ‘sons’, Douglas Fordyce, took centre stage in the Britain’s Got Talent final.

Imagine the tension, emotion and drama unfolding down at our Sports Shed HQ in Yate as we waited with everything crossed for Ant & Dec to announce the winners of the 2010 competition, although did we ever doubt that our Doug and his Spelbound comrades would ever triumph? Of course not!

We’ve known him for many years of course, and it’s testament to what Nikki and her fellow coaches have achieved here at King Edmund’s that Douglas and his family set their stall out to travel up and down the M5 relentlessly from their Honiton home in Devon for all those years, until other commitments forced his departure to London in early 2009.

Douglas and his family first encountered our club while competing against us, and such was the impression Nikki made on them that they decided the place for him to truly take off as an acro-gymnast was at King Eddies, where Nik and her staff had long been churning out national and international champions, in a ceaseless effort to take the world by storm!  How fitting, then, that King Edmund GC, and especially Nikki, should be recognised in the way it was following Spelbound’s blinding success, with media interest hitting fever pitch following Deadly Doug’s heroics in front of Simon Cowell and his fellow judges in the Britain’s Got Talent
auditorium! 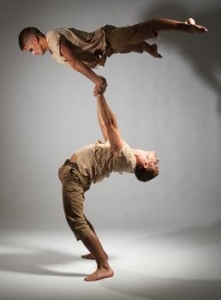 It was typical of Douglas to keep Nikki informed as the series came to such a nail-biting conclusion, and ever since too with all the wonderful things that have been happening to him, which says it all about the respect and appreciation he had for her at the way she transformed him from a very gifted and raw young gymnast into a world mixed pairs champion, in partnership with Shelley Evans, in 2006.

Doug has always been massively dedicated to his sport and his family have backed him to the hilt in his quest to succeed, whether it be here at King Edmund’s over five tremendous years, or with the fabulous Spelbound, who quite literally mesmerised Cowell and Co who thought they’d seen it all before Dougie and his crew turned up to strut their stuff!

It’s lovely given all he’s achieved that Douglas still considers King Edmund
GC as HIS club. There’s no doubting his roots are still firmly embedded here. He was always a good honest lad, quiet and very loyal to Nikki, with a great sense of humour. He was a popular member of our team and I for one am privileged to know him.

Perhaps the most important thing to have come out of it for me is the effect Spelbound’s success should have on this wonderful sport of ours. They achieved what they did because they were totally dedicated to acrobatic gymnastics. It made me wonder how long it took the Britain’s Got Talent judges to twig they were watching genuine sportsmen and women at work and not circus performers.

King Edmund Gym Club takes on future stars like Douglas from the age of 18 months, and guides the best and most dedicated ones through to seniority and national and international distinction.

With Nikki’s finger firmly on the pulse, this well-oiled machine has been in operation for more than two decades now. We want the wealth of talent it has produced to continue tumbling off it now the good times are truly here, thanks to the magic of television – and our truly amazing coaching team!