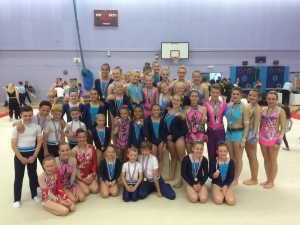 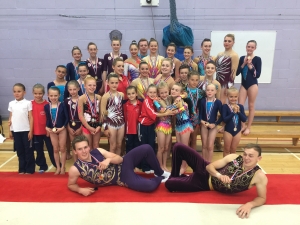 KING Edmund Gym Club’s burgeoning team of coaches are being hailed for their “loyalty and commitment” to acrobatic gymnastics after overseeing more impressive performances by their young charges on the domestic and international fronts.

The ever-growing South Gloucestershire club, which now parades an extraordinary membership of around 1,200 aspiring and fully-fledged gymnasts based at Yate International Gymnastics Centre within the confines of the town’s leisure centre, is basking in the afterglow of more competition successes. 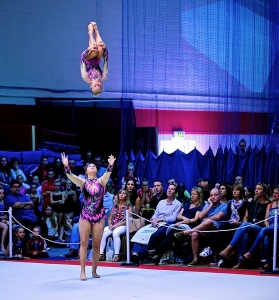 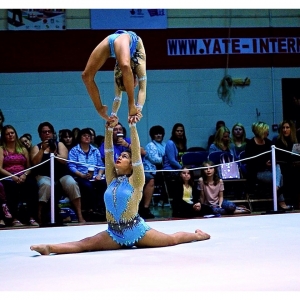 The same championships, for the more established performers in Taunton, reaped 17 gold, six silver and three bronze medals for the club, two of the events leading to a clean sweep of medals for team members and some of the highest scores of the weekend.

Meanwhile, coaches and gymnasts were being acclaimed again thanks to a string of fabulous performances by King Eddies’ elite gymnasts in the British Championships at Echo Arena Liverpool, where Finlay Cochrane and Kirsten Owen clinched gold to become British champions for 2015 in the 11-16 age group mixed pairs, and Millie Battensby and Dove Strachan-Wills won silver in the 12-18 women’s pairs. 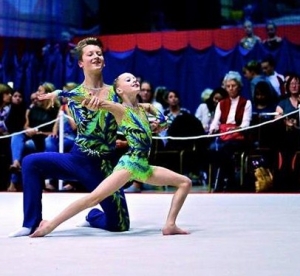 While Marcus Flint and Harry Hole were raising the roof with a creditable bronze award in the 12-18 men’s pair category, Abi Hipkiss and Tiana McClurg were celebrating gold to become British champions in the 13-19 women’s pairs section, and Chris Child and Rob Bates were battling superbly well for a silver medal in the senior class.

Not content with that, King Eddies found time to pack in an annual gymnastics competition, at which 200 gymnasts from seven countries participated in a high-level tournament. 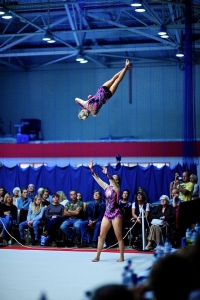 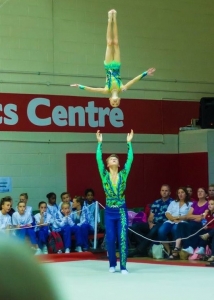 Now six of the club’s star performers – Kirsten Owen and Finlay Cochrane (11-16 mixed pair), Tiana McClurg and Abi Hipkiss (13-19 women’s pair) and Rob Bates and Chris Child (senior men) – are all preparing to make their mark in their respective categories at the European Acro Championships in Riesa, Germany, between September 28 and October 5 – representing Great Britain.

While the competitors have been rightly lapping up the plaudits, their 25-strong team of coaching mentors have been receiving recognition for their own considerable part in driving their junior and senior gymnasts to new heights on the tournament stage. 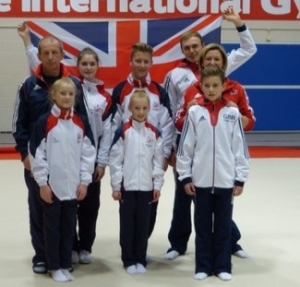 Long-serving head coach Nikki Thorne, a pathway performance coach for British Gymnastics and a Great Britain national coach, has been named a finalist in the Bristol Post Coach of the Year category ahead of the publication’s annual sports awards at the Bristol Marriott Hotel on Thursday, October 22, where the club is also a prime candidate to take the Community Club of the Year distinction.

Nikki and her King Eddies comrade Vladimir Makarchenko have been selected to help form the GB coaching staff for the Euros, just as fellow club coaches Kellie Chapman and John O’Mahony received similar call-ups to serve their country for a series of World Cup events earlier this year.

King Edmund club manager Mark Thorne said: “The gymnasts have every reason to feel pleased with everything that’s happening right now, but the loyalty and commitment shown by our coaches is a major factor behind all these successes.

“Through Nikki’s expertise and leadership skills, we have a first-class and devoted team of coaches at our disposal, all prepared to work overtime to ensure that not only do the gymnasts keep progressing, but that the centre is a happy and enjoyable place to practise and compete in. 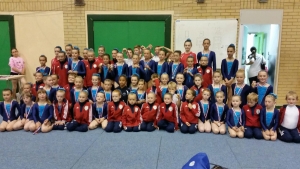 “It’s not just about our facility at Yate; we have satellite centres at Pomphrey Hill (Mangotsfield), Bradley Stoke and Thornbury and our coaches go out and hold gymnastics sessions for all age groups in numerous schools across the area.”

Mark added: “What’s pleasing, and humbling too, is that there are four generations of our own Wills family members actively involved in either coaching or on-floor participation, and it says a lot about the determination of those people, young and older, that they’re able to keep the King Eddies flag flying high some 35 years after it all began.

“Many of the coaching team have progressed into coaching from being gymnasts themselves and this has helped maintain continuity and continue the friendly atmosphere of the club, which we are rightly proud of.”