FOUR of King Edmund Gym Club’s elite and up-and-coming stars put behind them an unfortunate experience at their opening World Cup tournament in Bulgaria by brilliantly securing silver medals in the ensuing event in Switzerland only a week later.

Deadly duos Beth Dix and Chloe Gunter, and Robert Bates and Christopher Child, had been selected by Great Britain’s acrogymnastics team to represent them at senior level in both World Cup showpieces, together with their chuffed club coaches Kellie Chapman (Bulgarian trip) and John O’Mahony (Switzerland trip).

The first of the two illustrious competitions, held in the Bulgarian city of Varna, did not go to plan at all after 16-year-old Bates was lucklessly forced to pull out through illness, although he bravely competed on one of the scheduled three days before returning to his sick bed once more. 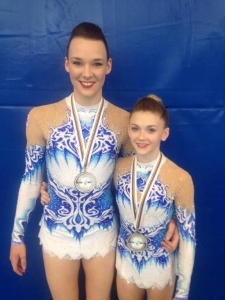 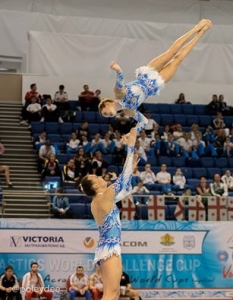 The stage, then, was set for the girls to go on and achieve a commendable fourth-place finish, offering the travelling South Gloucestershire-based contingent some comfort amid unforeseen and upsetting circumstances.

Remarkably Robert, who had been struck down by tonsillitis and accompanying ailments, hauled himself to his feet and was not only back in school taking important Year 11 exams hours after returning home on the Sunday night, but was aboard a plane heading for the picturesque Swiss city of Geneva the following Tuesday morning and eager to atone for his Bulgarian nightmare just days prior.

Not only did he take to the mat with relish over the three scheduled days of competition but he, with the expert accompaniment of 20-year-old gym partner Chris, swept to a silver medal conquest, a feat matched by their ecstatic female comrades Beth and Chloe, who also finished one off the top of the pile in the face of stiff competition from the likes of gold medallists China and third-place Russia.

Jubilant King Edmund head coach Nikki Thorne acknowledged: “It was a dream come true to see both our pairs come home with medals.

“They were all absolutely elated, especially the girls as this was the first time they’d achieved anything like it; they couldn’t believe it had happened to them, that all those long hours spent in the gym had paid off so richly.

“For Rob and Chris it was a terrific achievement after what they’d been through in Bulgaria. They’d arrived on the Tuesday morning and Rob had to go straight to bed and be put on antibiotics.

“He dragged himself out of bed to compete on the Thursday, but on the Friday he was too ill to perform. Fortunately he was treated really well by local doctors and the International Federation of Gymnastics’ medical staff. 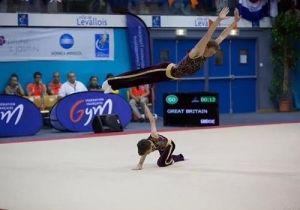 “Thankfully, by the time he’d got home on the Sunday ,the tablets had kicked in and he was feeling well enough to sit his exams on the Monday, join in training with us on the evening and fly out to Geneva the following morning!”

Nikki added: “What these guys went through, not least poor Rob with his illness, shows just how tough it can be at the top. It is not a bed of roses when you reach that standard and he and the rest of the team showed just how determined they were to pick themselves up from a horrible experience and go on to win medals in Geneva.

“They were all up against some quality nations in a pressure-cooker environment but all four held their nerves brilliantly, while many of their rivals – some top, top acro gymnasts among them, crumbled.

“Two years ago our Shanie-Redd Thorne and Danielle Jones finished second overall after their two World Cup tournaments, but never before had we welcomed two pairs home with medals.”